On Sunday evening, March 27, we had our latest in the Father Tony's Catholicism 101 series:  Three Days.  This was a conversation that discussed the Triduum:  Holy Thursday, Good Friday and Easter Vigil into Easter.  For those who attended, we had the opportunity to get a better understanding of Holy Week, the walk to the Cross Jesus made, and the invitation He extends to us each year to walk with Him.

Holy Week begins on Palm Sunday.  As we found in Scripture, Jesus was welcomed to Jerusalem as the King he was.  We are invited to participate.  As we pick up our palm, we accept that invitation.  We process into the Church, waving our palms, celebrating Jesus.  The people had an expectation of who Christ was and how He would assume the throne.  In very short order, those hopes were dashed.  As we continue into the Palm Sunday liturgy, we experience that as the Passion story is told.  It is very obvious this will not end with Jesus on a throne on earth, but mounting the Cross.

Monday, Tuesday and Wednesday, we hear the Gospels, preparing us further for what is to come:

Monday is the anointing of Judas' feet at Bethany.

Tuesday is Jesus' dual predictions of his betrayal as well as Peter's denial.

Wednesday again visits the pending betrayal as well as a conflict with Judas.

Wednesday's Gospel ends with the significant turning point in the story:  It was night.

According to Jewish custom, day begins and ends at sunset, rather than sunrise like we traditional view time.  The night is the time when the Lord works.  During Genesis, as the world was created, Scripture reads "Evening fell and morning followed" for each day of the story of creation.  The flood came in the night.  The exodus from Egypt began at night.  The birth and resurrection of Jesus all happened at night.  The heavy work of the Lord happens in the night.

The reason the Gospel's ending "It was night." is significant is twofold.  First, since we know the work of the Lord happens in the night, we are preparing for the work of salvation to begin in earnest.  Second, with the arrival of night, the powers of darkness have taken over the world.

As Holy Thursday begins, like Peter, we are invited to watch and pray.  There is only one Mass celebrated on Holy Thursday in the Parish.  It is a reliving of the Last Supper, which is the institution of both the Eucharist as well as the Priesthood.  As Jesus washed the feet of his disciples, so today, our priests wash the feet of members of their flocks.

After the Eucharistic at the Holy Thursday Mass, instead of any extras being reposed in the tabernacle by the altar, there is a procession of the Eucharist to the altar of repose.  At Holy Redeemer, this is the altar by the statue of St. Joseph.  The community is silently invited to spend time in Adoration, watching and praying as Peter had been invited to do.  Before midnight, when Jesus was arrested, Adoration is closed and the people leave the Church.

In preparation for the Good Friday services, the altar is stripped bare.  Everything is removed from candles to altar clothes. This is to eliminate the distractions of the emptiness of the space without Jesus.  Our focus has changed from Jesus' life to Jesus' death.

On Good Friday, no where in the world is the Mass celebrated.  There are liturgies, but the Eucharist that is distributed is left from what was consecrated on Holy Thursday.  During the liturgy, there are three distinct movements.  There are abrupt transitions between them, bringing home the solemnity, desolation and starkness of our life when Jesus is absent.

The third, and final movement, is the Eucharist.  The reserved hosts are returned from the altar of repose to the main alter.  We pray the "Our Father' and then receive the Eucharist.  From end of the distribution of the Eucharist until the consecration at the Easter Vigil, we are forced to fast from even the presence of the Lord.  This reminds us of the time Jesus spent separated from His earthly followers as he descended into Hell before ascending into Heaven.  This is a desolate and sad time, as it is meant to be.

The Easter Vigil begins in the dark of night with the Church in darkness. After a fire is started, the Easter candle is lit and from it, light spreads candle to candle until the entire Church is lit.  The Easter candle is placed next to the Word of God, and then the Exultet is sung.  A single voice shares the Proclamation Christ is alive!

The Mass of the Easter Vigil is when the Gloria returns for the first time since the start of Lent.  Holy water is blessed.  The people who have been preparing to enter into the Church are baptized and Confirmed.  We enter again into the Eucharist, sharing the mystery of Christ's death and resurrection.

As Church, we walk through the valley of the shadow of death and come through to the glorious resurrection on the other side.  We look forward to seeing you as we walk the Three Days with our Lord this year. 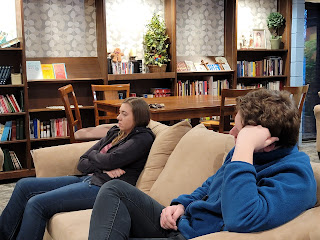 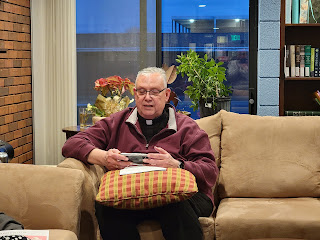 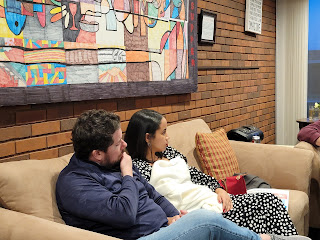 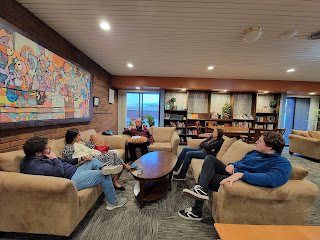