SEEK23 Day 3 again began with the celebration of Mass.  Today was the Memorial of St. Elizabeth Ann Seton.  Our presider was Bishop James Connelly, of the Diocese of Lincoln.  He had a touching homily about the importance of our Catholic Sisters in the formation of education and health care in the United States today, with St. Elizabeth Ann Seton as his primary focus.  She was a wife, mother, convert, founder of a religious order and the founder of the Catholic school system in the United States.  She is a role model for answering "Yes" to the call for missionary discipleship.

In addition to focusing on the memorialized saint of the day, he highlighted the Gospel reading for today in his homily.  It is from John 1:35-42 and can be found on the daily reading page at www.usccb.org.  "Jesus turned and saw them following and said to them, 'What are you looking for?' They said to him, 'Rabbi' (which translated means Teacher), 'where are you staying?'  He said to them, 'Come and you will see.'"  This is an internal dialogue we continue to have today.  It is part of our discerning, seeking, searching, asking.  Jesus replies, "I want to accompany you on our journey through life" in his response to Andrew and Peter "Come and you will see."  We are all at different places, but none of us are alone.  We have each other and we have Jesus.

The conclusion of Bishop Connelly's homily was powerful.  He shared the challenges he had with his mental health and the 11 month leave of absence he took from the Diocese while he sought professional help.  He focused on our need to ask for help, that we don't need to be strong and independent in the face of adversity.  We can seek help, and should.  His vulnerability touched the hearts of many. 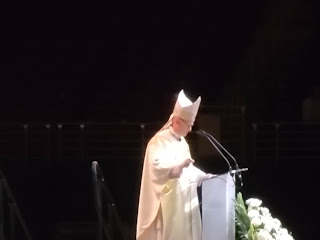 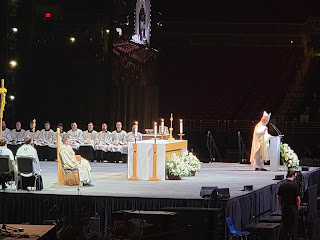 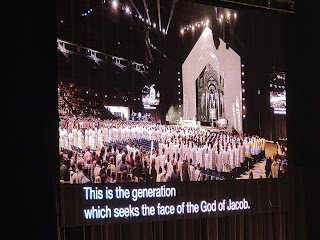 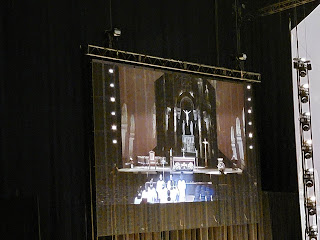 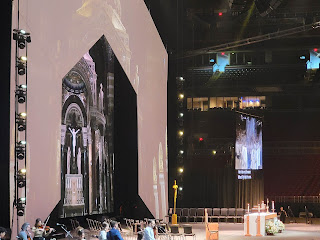 Our day was filled with impact sessions, visiting Mission Way for shopping and touring of the vendor and sponsor booths and lunch.  Our group met up with the NDSU Bison Catholic group and had an enjoyable afternoon and was even invited to sit with them (in much better seating than we have been able to find!)

Our hosts for the evening certainly know how to engage a crowd.  Last night we had a decibel competition to determine which host had the group that could be the loudest.  Tonight, there was a flashlight wave that raced around the arena.  It is quite powerful to see 17000 flashlight beams lighting up the space!  Curtis Martin also made a short stop on stage.  His keynote will not be done until Friday, so it was good to see him on the main stage. 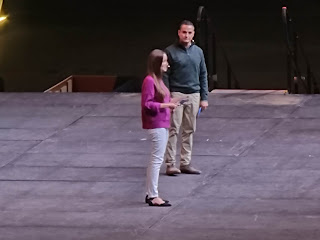 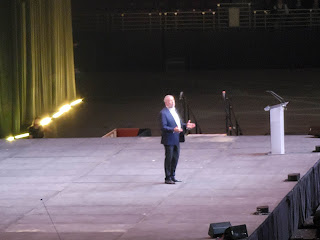 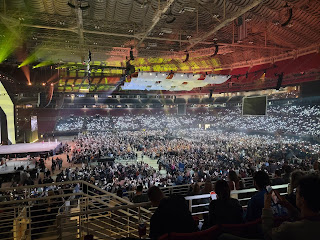 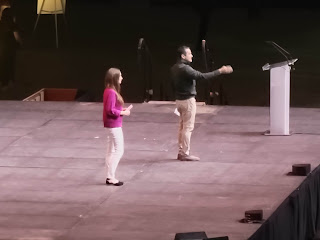 The first keynote speaker of the evening was Sr. Miriam James Heidland.  Sr. Miriam James is a former D1 college athlete who joined the religious order SOLT (Society of Our Lady of the Most Holy Trinity) in 1998.  She brings a unique perspective and understanding of the experiences impacting students' lives.

As she began her presentation, she focused on the number of things we will hear over the course of the conference that are repeats of what we have heard before.  Her observation was it is good to hear these things over and over because, while some things penetrate deeply into our hearts, others merely ricochet off of our hearts, not to be absorbed until another time when we are ready for them to penetrate deeply into our hearts.

Her primary message revolved around one of the articles included in Pope Emeritus Benedict XVI's "Principles of Catholic Theology:  Building Stones for a Fundamental Theology."  The principle is we know we are loved when we are told it is good we exist.  Jesus sings us the never-ending song of songs of authentic love.  There are places in our heart that only come alive in the song.  The challenge is we have the competing siren song from the enemy that is so seductive it draws us away from the authentic love of Jesus.  Often, the siren song may tell us that we are alone, unseen, unloved, a burden, it not good we exist, and we repeat the song to ourselves.

Jesus' song, however, is the song that vanquished darkness.  There is no portion of our lives that He doesn't want to sign beauty into.  He is coming for you and His heart is for you if we just open ourselves to receive Him.

She left us with the question "Where is Jesus coming for you in your misery?  It is good you exist!" 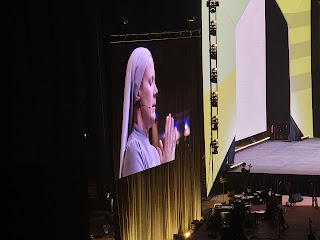 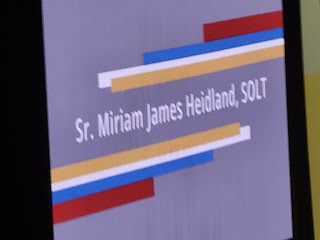 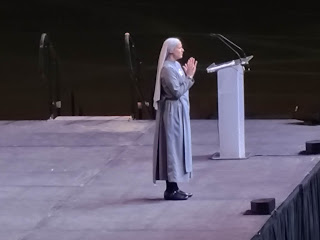 Our final speaker of the evening, before Adoration and Reconciliation, was Father Josh Johnson.  He shared the story of a 4th century saint named Mary, a hermitress and an anchoress, who fell away from the Lord and lived in a brothel for two years.  Her uncle, Saint Abraham Kidunaia, prayed for her while she was gone, and, when he discovered where she had went, he followed her to retrieve her.  Initially, she refused, but he persuaded her to come home.  Because of the experiences she had while at the brothel, and then upon her return home, she was an effective witness for the people in their community that struggled with sexual sins.  All of this was a reminder that it doesn't matter what we have done.  The Lord is waiting for us to return, to seek reconciliation with him and to move forward in holiness.

Even Peter, who was the first leader of the Church after Christ, was not a perfect man living a perfectly virtuous life.  He was a human, like us, who made decisions, like us, that took him away from Jesus.  He did however, like we can, return to Jesus.  He can be a source of hope and inspiration. 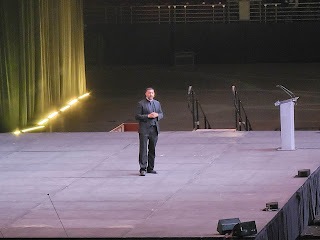 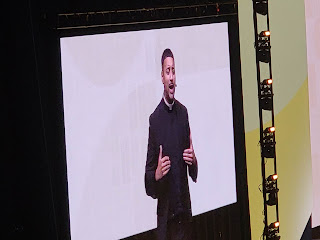 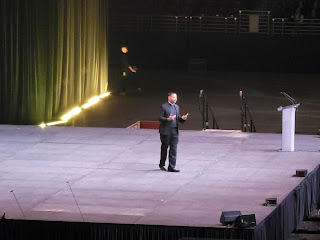 The evening concluded with extended Adoration, praise and worship music, and Reconciliation.  This will be a separate update.

Thank you for journeying with us on our spiritual pilgrimage through SEEK23.