Day 5 had an early start! There was a travelers' Mass at 7:30am.  Bishop Earl Fernandez joined us as the presider for the second time for the week.  His message this time was succinct.  We must have a clear mission of what we are about.  We should model ourselves after John the Baptist.

John the Baptist was the voice in the darkness pointing to the Messiah.

John the Baptist went to the desert to get focused, like the prophets of old.

John the Baptist was a spiritual entrepreneur.  He called people to return to the fork of the road to choose the correct path.

This was what John the Baptist gave to the people.  He pointed to the Lord.  He was willing to sacrifice himself for others.  He brought many to conversion.  We have all been called to be members of the Body of Christ.  We are to witness that God came from heaven and took on human flesh, suffered and died and rose to know that in Him there is life.

We are sent to proclaim the Gospel of Life.

This Mass was also the only Mass we were able to see Father Shawn.  While he had vested for each of the Masses, we were only able to catch one previous glimpse of him.  It was good to see him! 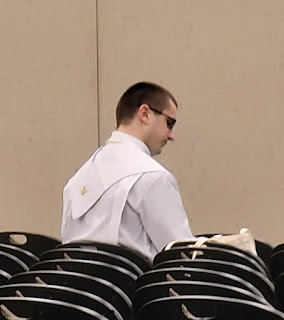 Our final set of keynote speakers began with a special guest:  Jonathan Roumie.  For those who are not familiar with him, he plays the role of Jesus on The Chosen.  Jonathan Roumie shared his personal walk with the Lord.  Several years ago, he was out of money, out of food and out of luck.  He fell to his knees in his apartment and poured out his heart to Jesus, completely and totally surrendering himself to the Lord.  Shortly after, he was offered his current role on The Chosen.  There are a few things he realized.

1.  You cannot do anything without God.

2.  Any forward movement in your life has to be propelled by God.

3.  If something is holding you back, you have to consider, "have you completely surrendered?"

4.  How are *you* called to engage with other souls on your campus? 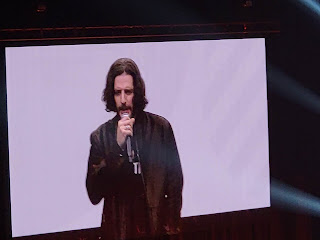 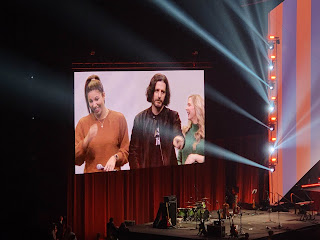 Curtis Martin was the first of the final two keynote speakers.  He began with a challenge:  "What's really at stake right now?"  He reminded us that everyone who has ever lived still does...somewhere.  The reality of what we are dealing with is nothing else matters.  You can have everything in the world, but if you don't have Christ, you lose.  If you have nothing on earth, but you have Christ, you win.

The Lord is calling you to walk into other people's lives so they can be transformed.  The Lord does not care about your "ability", he cares about your "availability."  If you seek first the kingdom of God, then everything else will be added.  In a very real way, each of us is writing our autobiography with the choices we make.

He next reminded us of the Pope Benedict XVI's great quote, "The world offers you comfort, but you are not made for comfort.  you are made for greatness."  There are many things you will never be able to do on your own, but you don't have to.  The Lord can, and will, and He wants to work through you.

If you become who you are meat to be, you will set the world on fire.  St. Catherine of Sienna.

He ended with a final challenge:  Who do you think needs to hear what you have heard?  and what is holding you back from reaching out to them? 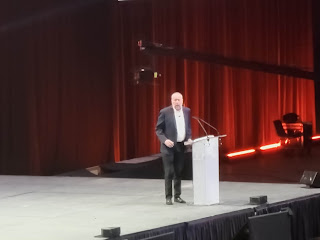 The final speaker of the conference was Jason Evert.  Most of the conference focused on the exterior work that needs to be done to share the Gospel on campus.  This talk was different.  Jason Evert reminded us that the heavy lifting of the spiritual life is done interiorly.  Saint Pope John Paul II lived such a deep interior life, he radiated it.  It drew others to him.  He had a primacy of listening over speaking, which reminds us we don't always have to be the mouth of Christ.  Sometimes we have to be the ears.

If, as you prepare to leave this conference, you realize you can not live as you are any more, if something broke in you, John Paul II invites you to come back again.  We don't just need to go out, we need to go in.  We need to fortify ourselves to prepare for our eternal life.  The Church does not need more stuff, the Church needs more saints. 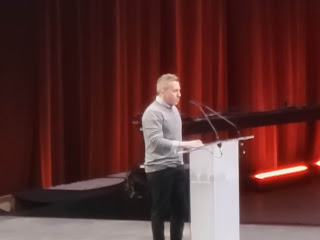 Five days of daily Mass, fantastic speakers, community building and working on our interior prayer life came to an end far faster than we had expected when the week started.  As we prepared to leave, Levi made sure to include our logo on the school logo board.  Then, it was time to load up and head for home. 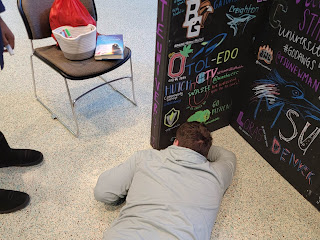 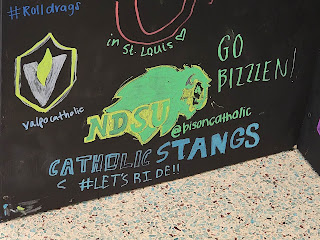